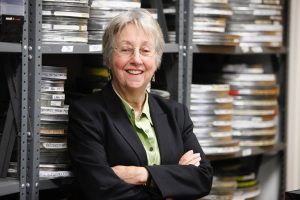 Sharon Pucker Rivo is the Co-Founder & Executive Director of The National Center for Jewish Film (NCJF). She has been a leading force in the field of Jewish film and culture for more than four decades through her work as an archivist, curator, programmer, film distributor, film producer, and academic. In the mid-1970s she rescued a languishing collection of Yiddish-language feature films. Today, NCJF is the largest archive of Jewish film outside of Israel, and one of the largest distributors of new films with Jewish content. The recipient of many honors, including awards from the Boston Society of Film Critics, the National Foundation for Jewish Culture, and Anthology Film Archives, Sharon has served on many grant panels & festival juries, curated film retrospectives around the world, and directed 22 film festivals in Boston. She has directed the restoration and preservation of hundreds of films. She is on the faculty of Brandeis University, where she teaches on the history of Jews in cinema, a field she helped pioneer. Born in Kansas City, MO, and a graduate of Brandeis Unviersity and the University of California Berkeley, Sharon is a long-time resident of Brookline.