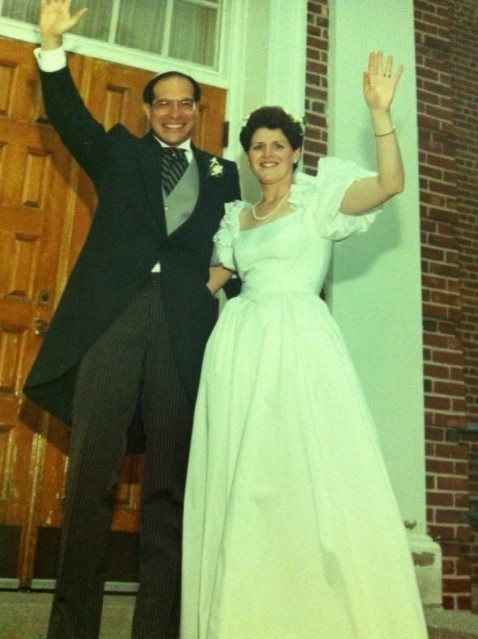 Humans of TE: One Story at a Time – #TEGivesThanks #ComeHometoTE

This November, Temple Emanuel gives THANKS to YOU, our community. Join us each day as we highlight a fascinating member of our community.

“I am the daughter of a Jewish child refugee from Kassel, Germany who arrived in America in 1939 at the age of 9 with his parents and little sister, and little else.

I graduated from high school at 16 1/2 – too young, but NYC schools were crowded then, so skipping a grade was encouraged. I went to Boston University in the Fall of 1973, after my mother told me she’d spent a summer taking a course here in 1951 and loved it (I will always be grateful to her for that.).

Upon arriving home for that first winter’s break, I discovered my mother was pregnant. I had been an only child until then; you can imagine the shock! The first thing I said to my parents was, “All my life I wanted a sibling. Now?! Now, when I’m gone?!” My mom never forgot this outburst! I called my best friend from college and said, “Karen, you’re never going to believe this: my mother is pregnant and it’s a boy!” She still talks about that call. It turned out that my mom was one of the first women in America to have an amniocentesis. She was 44 when my brother David was born in March,1974. It was the first time I’d ever seen a newborn. My friends at BU were so excited for me – they all had siblings – but I was skeptical. It took me a few years to get used to being a sister, but my brother, who has two kids of his own now, is very dear to me.

My husband Steve and I met at a CJP-sponsored Jewish singles’ dance in 1983 after seeing each other a few times at The Jewish Young Adult Center, the brick and mortar incarnation of online dating in those days (also a CJP endeavor). It was love at first sight for me; it took him a little while to get on board!

We became engaged in 1985. Since we both had lived in Boston for many years – Steve was originally from Hartford; I was from Miami and NYC –  we chose to have our wedding here. We both wanted a synagogue setting. I visited a few, but none seemed right for us. Since we both had grown up in Conservative shuls, Steve said, “Go to Temple Emanuel. When my father died (in 1982), I went to say kaddish there, and Rabbi Chiel was so nice to me.”  On the day we were to meet with the rabbi, we arrived at TE early, greeted by his sweet assistant Wilfredeen. She smiled at us and said, “Rabbi Chiel’s marriages stick!” We loved R. Chiel z”l, and 35 years later, we love our current clergy and are still proud and grateful members of TE!

Our daughter Erica was born in 1990, and it was then that we started regularly attending Shabbat morning services. I was honored to chair two Sisterhood luncheons in those first years, and Erica always came as the mascot!

I was one of the first people to take Me’ah via CJP in the 1990s. One of the first things I learned was that there are 613 mitzvot in the Torah. Immediately afterwards, and for the past 25 years, I say I have been “followed by mitzvot” because the number 613 continually shows up in my life! It’s the amount of change I get in the grocery store; it’s the time of day I wake or notice at dinner time; it is the page in the Tanach we are to read on Shabbat morning; it’s the birthday of a new friend. It is a very special part of my life.”